More than 1GW of stringer machines

All the benefits of led sun simulator Ecosun 10L 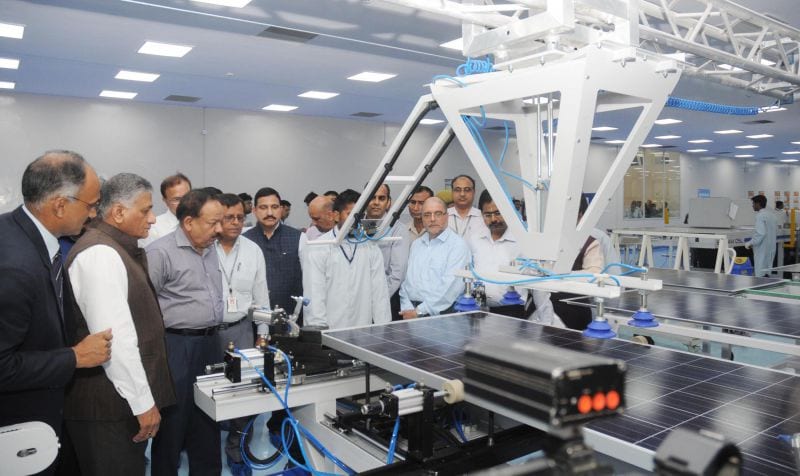 More encouraging news for the Indian photovoltaic market during the opening ceremony of the Automated Solar Photovoltaic Module Manufacturing plant at Central Electronics Limited on Wednesday the 3rd of June.

“Solar Energy Production has to be made a mass movement in the Country” – Says Dr. Harsh Vardhan

The Union Minister for Science & Technology and Ministry of Earth Sciences Dr. Harsh Vardhan, has said that solar energy production has to be turned into a mass movement in the country. He was speaking after dedicating a newly set automated solar module production plant at the Central Electronics Limited plant at Sahibabad, Ghaziabad near Delhi today. He said everyone should emulate the example and progress made by Gujarat in the field of solar energy under the Steward ship of Shri Narendra Modi while he headed the State Government. He appealed to people on behalf of the Prime Minister to share Shri Narendra Modi’s enthusiasm in taking forward the country in the field of solar energy.

The Minister of State for Statistics & Programme Implementation (Independent Charge), and the Minister of State for External Affairs and Overseas Indian Affairs Gen (Retd) Dr. V.K. Singh speaking on the occasion said that employees in the CEL seems to be committed to make India a leader in Solar Energy production. He called for serious efforts to increase the capacity of the plant to produce 200 megawatts panels per annum by adding capacity to the newly commissioned automated production line of 40 megawatts panels per annum in the next two to three (2-3) years.

The Minister of State for Science & Technology and Earth Sciences, Shri Y.S. Chowdary said more such 40 megawatts panels per annum automated production lines should be set up in various parts of the country as a part of the “Make in India” programme. The Minister said that there should be more increase in localised production of solar energy for which there have also been several incentives by various governmental agencies. He called for people to participate in skill development and the entrepreneurship programmes in the area of solar energy.

The local MLA, Dr. Amarpal Sharma, the CMD of CEL, Shri Nalin Shinghal, Central Electronics Limited (CEL) a Public Sector Enterprise under the Ministry of Science & Technology, Government of India and senior officials of the CEL and Science & Technology Ministry attended the launch ceremony of this production facility.