How to manufacture a photovoltaic module 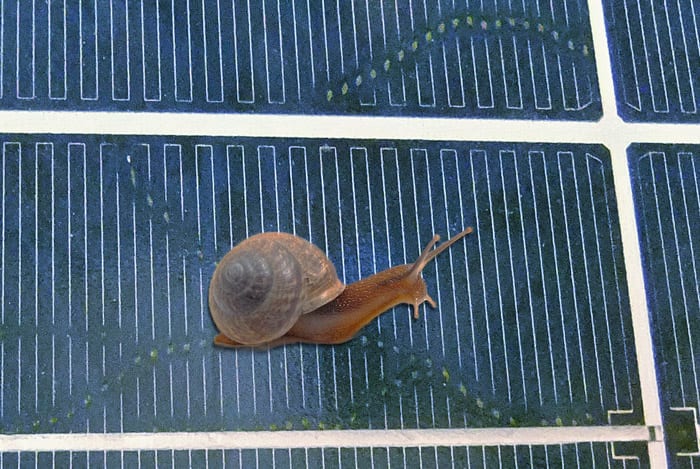 – I have several modules with evident signs of snail trails, is this a problem for the efficiency?

– My modules have strange marks on the front, will they lose power because of this?

– It was told that snail tracks generate the breakage of cells, is it true?

– After how long time of outdoor exposure can you notice snail trails?

These are some frequent questions that we often receive from who contacts us for an advice on the performance of their photovoltaic systems.
Let’s clarify this topic and know more about the effect known as “Snail Track”.

This problem has been studied since early 2012 and the typical optical effect, that is presented in correspondence with micro cracks in the cells (see figure), consists in a discoloration of the paste used for the serigraphy of the photovoltaic cells. The process happens with the presence of heat, UV radiation and humidity. From studies performed it shows that after a couple of months of outdoor exposure of defected modules the snail tracks start to appear. Normally, except for new breakages caused in the module, the snail track remains stable after a couple months.
Often in correspondence with a crack, a localized shunt phenomenon is generated that develops heat and gives the possibility to small quantities of humidity to reach the surface of the cell.
Not all kind of breakages generate the effect above for which the intensity of the effect depends both on the encapsulating material as well as the material of the serigraphy.
Moreover it depends also on the depth of the crack and therefore on the amount of energy that it involves and the amount of power that locally is transformed into heat.
Considering only the optical effect it doesn’t compromise in a significant way the performance of the photovoltaic module, or rather the apparent yellowing of the EVA doesn’t reduce the produced power.

From the other side it is possible to confirm that where you see a visible snail track, surely a cracked cell is present in a more or less significant way and this crack can be associated with a degradation of the production capacity.

Not all cracks cause a deactivation of a significant area of the cell. Electroluminescence and IV test remain in any case essential in order to quantify the effective extent of the degradation consequences caused by a broken cell.

Making a summary we can say:

Snail tracks on photovoltaic modules are present in correspondence to broken cells;
Tt influence the power of the photovoltaic module;
The cell cracks under these tracks can cause a power degradation;
Snail tracks are being created during the first months of outdoor exposure and remains thereafter constant;
The real problem to investigate is related to the cracks

The broken cells are the real cause to be investigated.
As a conclusion we can say that a snail track is only an evidence of a cell crack but it is not possible to quantify the extent of the effect regarding performance of the module. The real enemy to blame for a power degradation is in fact the broken cells that are insulating cell areas that can introduce losses up to 30-40 % of the theoretical power production of the system.

Contact us for technical advices or for testing your photovoltaic modules.